Enabling e-Science with the LambdaGrid

The emergence of a global LambdaGrid cyberinfrastructure is leading e-science from a bandwidth-constrained to a bandwidth-rich world. In this new LambdaGrid architecture, it’s possible to access scientific data anywhere in the world over optical networks with almost the same immediacy as if the data were stored on a local hard disk! We see at iGrid a few pioneering researchers who are showing us how this transformed cyberinfrastructure allows them to carry out a new level of science and discovery, using persistent high-performance collaboration on a planetary scale that allows global teams to interactively obtain, analyze, and share vast amounts of distributed data.

Previous iGrids in 1998, 2000 and 2002, and GLIF’s organization that started in 2001, have rapidly led to a worldwide set of dozens of interconnected 10Gb lambdas. Since the last iGrid, we have seen a global movement toward supporting a wide range of e-science 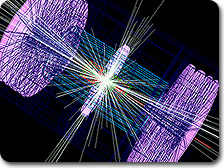 projects by adopting a Service-Oriented Architecture for the middleware that rides on top of the physical infrastructure. In this process, the traditional Grid middleware over the shared Internet is transformed into a LambdaGrid over the GLIF optical infrastructure, integrated with Web Services.

In the iGrid 2005 applications and symposium, one can see global grass-roots experiments combined with collegial best-of breed processes to develop a new generation of shared open-source LambdaGrid Services. We see demonstrations of LambdaGrid Services supporting scientific instruments, high-definition video and digital cinema streaming, visualization and virtual reality, high-performance computing, data analysis, and the control of the underlying lambdas themselves. The world is clearly in a rapid evolution to a new cyberinfrastructure, with global innovations making the various subsections of the infrastructure work efficiently and in harmony.

The process of building up the LambdaGrid infrastructure to support e-science is reminiscent of the effort to build up a networked supercomputer infrastructure 20 years ago. At first there was hardly any real science being done. Rather, the few pioneer scientists that showed up were allowing their codes to be used to understand how to restructure them to take advantage of the high-performance hardware (e.g., vector processors) or to set up visualization capabilities or remote interactive control of the supercomputer. Gradually, as those pioneers allowed the hardware and software of the infrastructure to mature, a second generation of homesteaders showed up and started using the infrastructure to do science. I think we are still in the pioneering phase of LambdaGrid, but by 2007, the research should advance sufficiently enough to be all about homesteading science that you can do with the global LambdaGrid Services developed by and demonstrated at iGrid 2005.